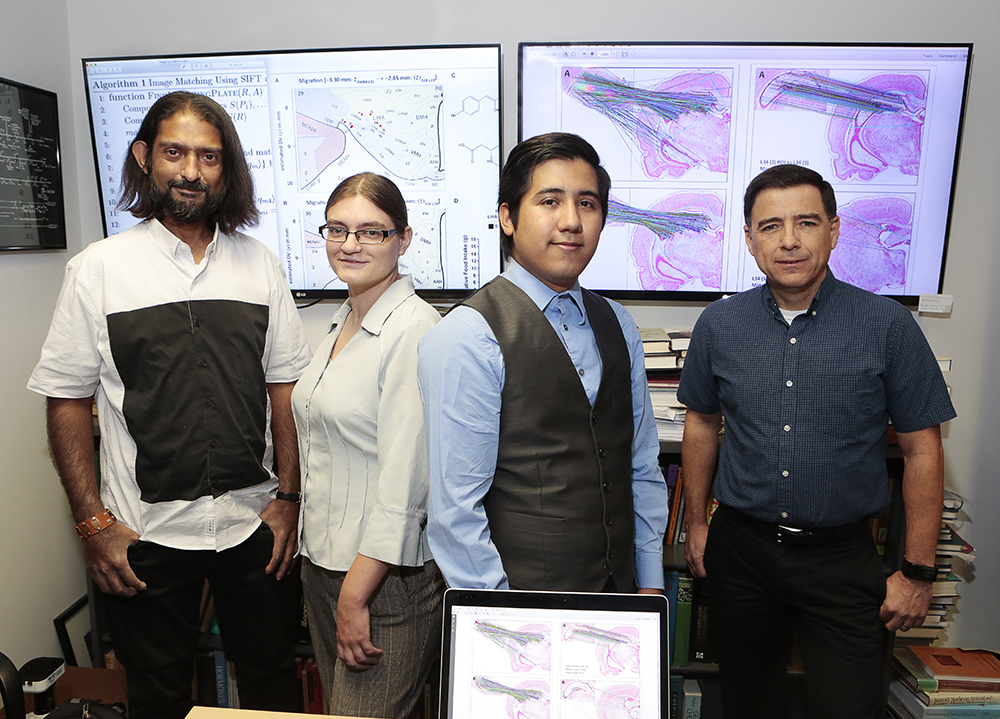 A team of UTEP professors and students has published valuable findings in creating a data migration method to utilize mapped data between different brain atlases. They are, from left, Arshad Khan, Ph.D., associate professor of Biological Sciences; Claire E. Wells, a December 2017 graduate of UTEP’s Pathobiology doctoral program; Jose G. Perez, a computer science student who received his bachelor’s degree in May 2018; and Olac Fuentes, Ph.D., associate professor of Computer Science. The results of the group’s five-year effort were published in May 2018 in Frontiers in Systems Neuroscience, a widely read, peer-reviewed and open-access scientific journal.
Photo: J.R. Hernandez / UTEP Communications

A quartet of two UTEP professors and two students who represent two colleges from The University of Texas at El Paso has taken a valuable step in creating a data migration method to utilize mapped data between different brain atlases.

The results of a five-year, interdisciplinary effort were published this month in Frontiers in Systems Neuroscience, a widely read, peer-reviewed and open-access scientific journal. The work was conducted by Arshad Khan, Ph.D., associate professor of Biological Sciences in the College of Science and director of the UTEP Systems Neuroscience Laboratory; and Olac Fuentes, associate professor of Computer Science in the College of Engineering and director of the Vision and Learning Laboratory; along with their students, Claire E. Wells, a December 2017 graduate of UTEP’s Pathobiology doctoral program; and Jose G. Perez, a computer science student who received his bachelor’s degree in May 2018.

The study offers thousands of neuroscientists around the world, who use the rat as an experimental model to study brain function, a way to take data that have been mapped in one rat brain atlas and migrate them over to correct locations in a different atlas. The method allows the migrated data to be aligned and contextualized with other datasets mapped in the recipient atlas to generate new hypotheses that would be difficult to formulate without the ability to interrelate the collected data in a common reference space.

The impetus for the study began in 2013, when Khan approached Wells, who was going through a laboratory rotation as part of her doctoral work, about tackling a problem he was working on.

“When you try to bring brain-mapping data together from multiple papers, the data are not compatible with one another,” Khan said. “That’s the main problem we were trying to solve. In my field, at the pre-clinical level where we use animal models to help understand human neurological illness, there are almost 100 years of data, a lot of which are still very valuable. They are not obsolete. But they might be locked inside formats that modern scientists don’t use anymore or only use in a restricted way. The challenge is to find a way to migrate them from one format to another so that they are more widely used and placed alongside other data for the first time that have already been mapped in the alternate format.”

Wells took on the challenge. Khan had examined two widely used and authoritative series of rat brain atlases, one created by Dr. Larry Swanson at the University of Southern California, and the other by George Paxinos (University of New South Wales, Sydney, Australia) and Charles Watson (Curtin University of Technology, Perth, Australia). These atlases have been used for decades by neuroscientists to map the results of their research, including locations sensitive to deep brain stimulation experiments, elaborate trajectories of new nerve cell connections, and unique molecular targets for potential drug-based therapeutics to tackle mental illness. In order to permit future integration of these separate and isolated datasets back and forth between the atlases, Khan created a tool to coarsely align their mapped brain levels in one dimension by utilizing coordinates based on their published skull landmarks. As part of her dissertation work, Wells attempted to migrate a set of test data from one atlas to the other using Khan’s alignments. But, Wells said, there was no way to ensure that her migrations were accurate.

“All the atlases are made with regard to a coordinate grid which tells you your position in the brain along the X, Y, Z axes,” Wells said. “You can describe the location of any structure in the brain using those coordinates. However, it’s not going to be precisely the same set of coordinates in one brain as it is in another brain that identifies that same position.”

The project was stalled, Khan said, until he met with Fuentes, who had attended a seminar Khan was invited to deliver by Ann Gates, Ph.D., and Nigel Ward, Ph.D., professors in the Computer Science department in March of 2015. Fuentes introduced Khan to a new approach.

“I told (Khan), ‘We could solve this problem for you,'” Fuentes said. “We have computer-vision algorithms that look at images, extract features and can match them up. It’s basically an image-matching algorithm. We view this as probably the first part of a larger scale project where we can actually match real images of the brain.”

Perez became involved soon after. Under Fuentes’ supervision, Perez developed an algorithm that produced a set of matches between the atlases through photographs of the brain tissue sections published within them. In contrast to Khan’s approach of using external (skull) landmarks, Perez’s algorithm was examining internal (brain) landmarks.

Khan analyzed the data sets produced using both approaches and found them both to generate matches within the same range of locations. This presented the group with independent evidence that supported the findings of both atlas-alignment methods.

Two years later, the collaboration came to fruition with the publication of the group’s study. Khan and Fuentes point to the successful effort as a testament to the caliber of the students.

“Getting the students to work on something that has a real-world impact is really important,” Fuentes said. “It helps them understand other disciplines and the language within those disciplines. We were working on this problem for a while. It wasn’t until we understood the terminology and what exactly the problem was that we made progress. When you understand the problem, then you can posit a solution that will really work. For (Khan and Wells) to understand the capabilities of the algorithms that we work with, and for us to understand what exactly the problem that they want to solve is, we had to work together effectively. It’s been very rewarding.”

Khan agreed and said the group is grateful to have contributed the first step to what is surely a segment of neuroscience that has the potential to grow significantly.

“We in biology are often looking for smart students, such as Jose, and smart scientists, such as Dr. Fuentes to help us with complex computational problems that we aren’t equipped to solve,” Khan said. “Conversely, computer scientists are looking for real-world applications of their algorithms. So, the interdisciplinary collaboration between Dr. Fuentes and myself really fulfilled needs on both sides, which of course is good.

“But more importantly, this will allow scientists who routinely use these atlases to be able to go back and forth between them, look at data mapped in one [atlas] and use our tool to migrate the data over to another atlas. So, there’s this whole field of data migration — like converting something from a CD to an MP3 – which is becoming relevant in neuroscience. We’re helping render valuable data into a format that has greater usability.”

The group also expressed gratitude for the various organizations and funding mechanisms along the way that assisted their efforts to publish their findings. In addition to major grants awarded to Khan by the National Institutes of Health (NIH) that support research in the UTEP Systems Neuroscience Laboratory, funding support was also provided by UTEP’s NIH-funded BUILDing SCHOLARS program and the Program to Educate and Retain Students in STEM Tracks (PERSIST), funded by the Howard Hughes Medical Institute. The National Science Foundation’s UTEP SMARTS Program and UTEP’s NIH-funded Border Biomedical Research Center (BBRC) also provided critical support.

The University of Texas at El Paso